Fred McFeely Rogers (March 20, 1928 – February 27, 2003) was an American television personality, musician, puppeteer, writer, producer, and Presbyterian minister. He was known as the creator, composer, producer, head writer, showrunner and host of the preschool television series Mister Rogers’ Neighborhood (1968–2001). The show featured Rogers’s kind, neighborly persona,[1] which nurtured his connection to the audience.[2] Rogers would end each program by telling his viewers, “You’ve made this day a special day, by just your being you. There’s no person in the whole world like you; and I like you just the way you are.“ 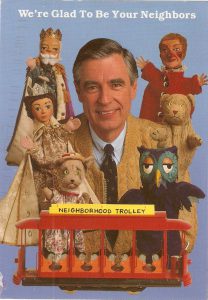 If you like to know more about Mr. Fred Rogers, watch the following video:

Quote:
“You rarely have time for everything you want in this life, so you need to make choices. And hopefully your choices can come from a deep sense of who you are.” Fred Rogers.