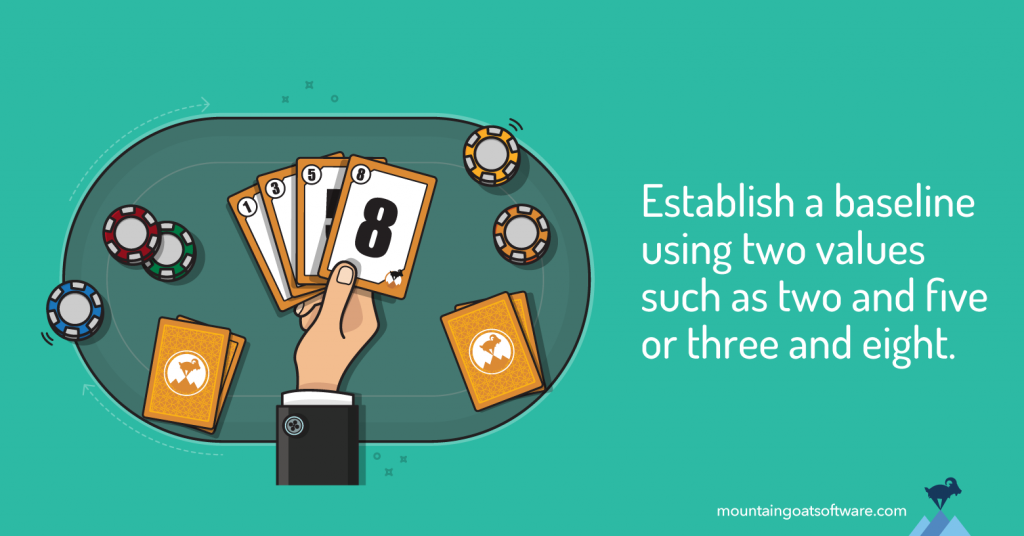 … relative estimating like with Planning Poker suffers from a bootstrapping problem: How does a team select the initial estimates to which they’ll compare?

Ideally, the team is able to identify both a two-point story and a five-point story. There is evidence that humans estimate most reliably when sticking within one order of magnitude.

Identifying a two-point product backlog item and a five-point item does a good job of spanning this order of magnitude. Many other items can then be more reliably compared against the two and the five.

If finding a two and a five proves difficult, look instead for a two and an eight, or a three and an eight. Anything that spans the one to 10 range where we’re good estimators will work.

Additionally, comparing all subsequent stories to a one-point story is difficult. Saying one product backlog item will take two or three times longer than another seems intuitively easier and more accurate than saying something will take 10 times longer.

I made this point in my 2005 “Agile Estimating and Planning” book (now also a video course). In 2013, it was confirmed by Magne Jørgensen of the Simula Research Lab. Jørgensen, a highly respected researcher, conducted experiments involving 62 developers. He found that “using a small user story as the reference tends to make the stories to be estimated too small due to an assimilation effect.”

Why Use Two Values for a Baseline?
Establishing a baseline of two values allows for even the first stories being estimated to be compared to two other items. This is known as triangulating and helps achieve more consistent estimates.

If a team has established a baseline with two- and five-point stories, team members can validate a three-point estimate by thinking whether it will take longer than the two and less time than the five.

Citing again the research of Jørgensen, there is evidence that the direction of comparison matters. Comparing the item being estimated to one story that will take less time to develop and another that will take longer is likely to improve the estimate.

Quote:
“The higher the price of information in a software team, the less effective the team is.”
― Yegor Bugayenko, Code Ahead: Volume 1